Not got time to trawl through the small print of the Energy White Paper in advance of COP26 this November? Don’t worry – we’ve got you.

The Energy White Paper was released by the Department for Business, Energy, and Industrial Strategy (aka BEIS) in December 2020, and forms the foundation of the proposed strategy to help the UK achieve its goal of net-zero emissions by 2050.

A white paper is a policy paper that outlines a course of action or future legislation proposed by the Government. It forms a basis for follow up discussion and consultation by Parliament.

Where does the Energy White Paper sit in the UK’s recent climate change legislation timeline? 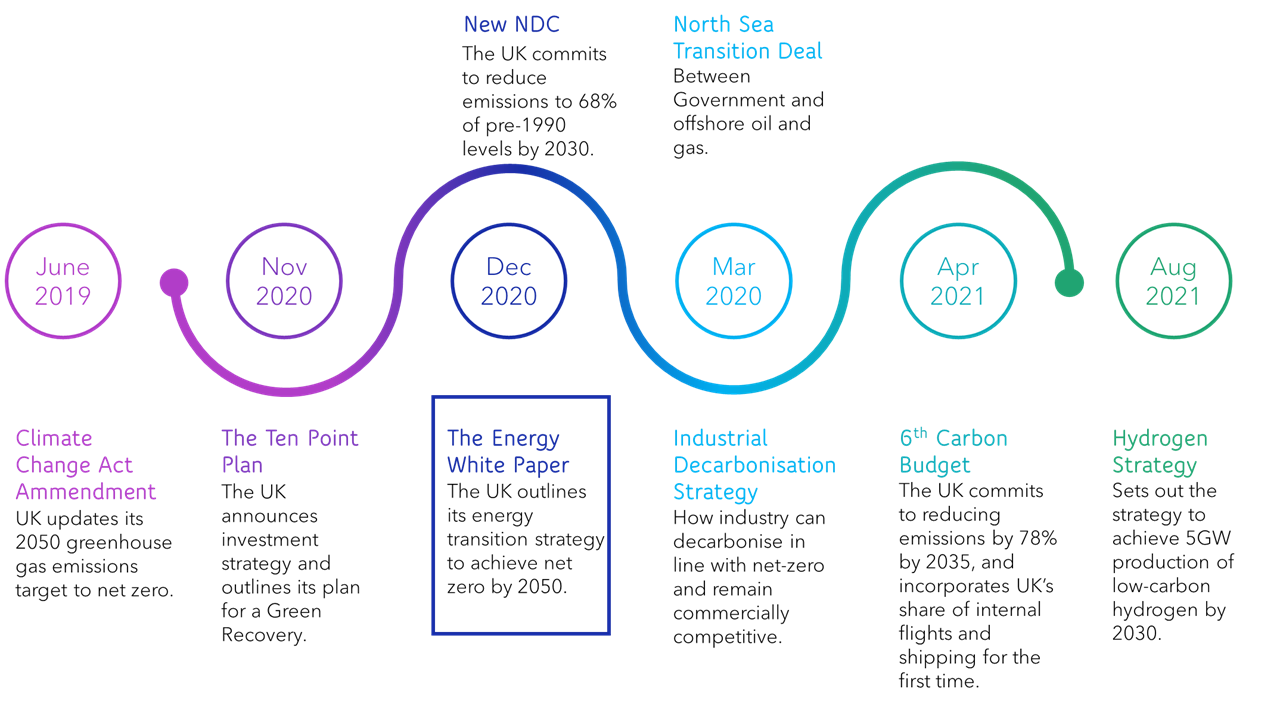 The Energy White Paper builds on the investment strategy the UK published in its Ten Point Plan for a Green Industrial Revolution with a focus on how it will clean up the UK’s energy system. It is published amid progressively more ambitious greenhouse gas emissions targets outlined in the UK’s updated Nationally Determined Commitments (NDC) and the Sixth Carbon Budget. The Energy White Paper supersedes the UK’s Integrated National Energy and Climate Plan (not shown in the infographic above).

The Energy White Paper is split up into six chapters: Consumers, Power, Energy System, Buildings, Industrial Energy, and Oil and Gas. It also includes explainer sections on the Ten Point Plan, BEIS energy supply/demand modelling, and transport. Key commitments reiterated throughout the document are highlighted below.

Powering the UK with a greener portfolio:

The flurry of policy papers, consultations, and reports published by the Government departments and Parliamentary committees in advance of the UK’s presidency over COP26 is promising, as long as the UK can deliver on these lofty goals and keep to its own deadlines.

Perhaps one of the more worrying admissions in the Energy White Paper is that there is no expectation to be able to cease the production of oil and gas by 2050.

The most optimistic estimate by the Climate Change Committee is that production of natural gas could drop to 80% by 2050, compared to levels in 2017. However, UK companies are and will be encouraged to diversify their energy production portfolio, and to address their emissions by supporting CCUS and low-carbon hydrogen production.

Reflecting on the Pupil Power Roadshow at COP26

This site uses Akismet to reduce spam. Learn how your comment data is processed.